← more from
Awesome Tapes From Africa
Get fresh music recommendations delivered to your inbox every Friday.
We've updated our Terms of Use. You can review the changes here. 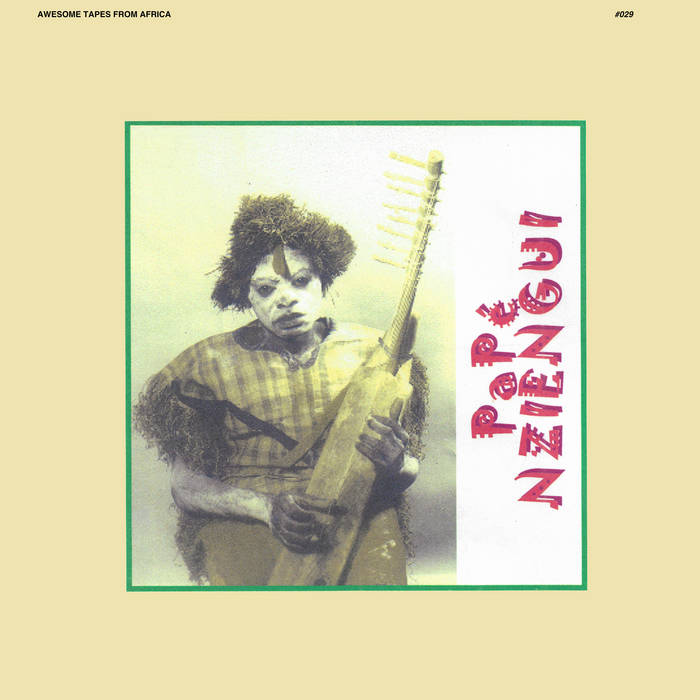 Faisal Jewell Moghogho is the Best Song from the Album. When I listen to it, I imagine that I'm Exploring the Jungles of Gabon in the late 1980s Favorite track: Moghogho.

Papé Nziengui, the tree that unveils the forest

The tree that veils the forest...

Never has this expression been so appropriate as when it applies to the relationship that Papé Nziengui has with the world of Gabonese harpists, to the central place that he occupies to the point of seeming ineradicable, unmovable and perpetual.

However, if history is any clue, this situation seems to be a characteristic feature of Gabonese harp music insofar as previously, in the years leading up to Independence, one harpist figure was the focus of all attention: Maturin Rampano.

But, if we superimpose Nziengui’s and Rampano’s two stories, one fact stands out: they claim not to be “insiders.” In other words, they would not have subscribed to the rites of passage which are conditions for access to the various initiatory brotherhoods (Bwiti, Mouiri, Mabandgi, etc.) whose harp aestheticizes the mysteries and musicalizes the rituals. Nziengui echoes this sentiment: “Uninitiated, my harp penetrates the initiates.” Could this be the nec-plus-ultra, the particular touch that separates the Exceptional from the Ordinary? How can we admit that the beti, the ngombi (harp) player, the one who receives messages from the beyond and "converts these statements by means of the harp," is not himself an eminent member of the Brotherhood? In any case, shedding light on this mystery, removing this paradox, should be the preferred way to understand the worldwide success of Papé Nziengui.
A man of openness, a ferryman of cultures.

In a conservative society where the sacred is confused with secrecy, exposing the mysteries of Bwiti in broad daylight is often apostasy and can be punished by exclusion or even execution.

Nziengui has always claimed that he faces such risks because he never felt enslaved to a community that governs his life, that regulates his conduct, that has a right of censorship over his activities. Like Ravi Shankar, the famous sitarist, Papé Nziengui is a man of rupture but also of openness, a transmitter of culture. As proof, he has established himself in Libreville as the main harpist for sessions and concerts, accompanying the greatest national artists (Akendengué, Rompavè, Annie-Flore Batchiellilys, Les Champs sur la Lowé, etc.) as well as foreign artists (Papa Wemba, Manu Dibango, Kassav', Toups Bebey, etc.). In 1988, he was the first harpist to release an album in the form of a cassette produced by the French Cultural Center (Papé Nziengui, Chants et Musiques Tsogho). At the same time, he created his own group (Bovenga), combining traditional music instruments (musical bow, drums, various percussion instruments, etc.) in the framework of a true national orchestra, which gave the first concert and the first tours of a traditional music that was both modern and dynamic, thus "democratizing" the harp, to the dismay of certain purists. He gave numerous concerts and produced a dozen opuses, including Kadi Yambo, subsidized by the European Union, and Kumua Mboka (2009).

Kadi Yombo, published in 1989, is certainly the most successful album in the quest for a fusion between tradition and modernity. Combining beating rattles with a layer of synthesizers, Nziengui blends in a contrapuntal dialogue characteristic of harp playing: male song in appeal and female choir in response, male voice of the musical arc and rhythms of female worship. But above all it’s Tsogho ritual music and modern studio orchestration. The result is an initiatory itinerary of 10 musical pieces which are all milestones likely to be simultaneously listened to, danced, meditated on, and soon acclaimed.

Where the majority of other harpists lend themselves to an occasional and mediumistic play, or limit themselves to liturgical channels and circuits, Papé Nziengui asserts himself as a full-fledged artist, imposing the modernity of harp music, not as a simple folkloric and obsolete expression but as an ever-present moment, in phase with the interrogations of each era. What does it matter to him to "be initiated"? Wouldn't he be, since before his birth, the fruit of an infused initiation, making useless or superfluous, if not redundant, any other sacramental step?

A precocious genius, a master before his time.

Papé was born around 1958 in the vicinity of Mouila (South Gabon) to Tsogho parents, a people known to be one of the depositories of the initiatory voice of Bwiti. Barely out of childhood, his precocious virtuosity made him the official beti, or harp player of the village and its surroundings. Incited to leave by his older brother, he arrives in Libreville, the capital, with a miniature harp in his light luggage. He soon scoured the "Bandjas" (bwitist temples) of the working class neighborhoods called Matitis, to the point of catching the eye of a producer of a television program promoting young talent: Young People Are Fantastic. Events accelerate then: the success is such that Nziengui convinces Daniel Odimbossoukou, the Director of the National Theater, to recruit him as a harpist. He travels the world from Lagos to Paris, from Tokyo to Cordoba, from Brussels to Mexico City to become a true icon, the emblem of Gabonese music.

Like Bob Dylan, "electrifying" folk and Bob Marley mixing rock with reggae, some purists have criticized Nziengui for having distorted the music of harp by imposing a cross with modern instruments. They even went so far as to claim that Nziengui was just an average harpist covering his shortcomings with stunts that were only good for impressing neophytes; like playing a harp placed upside down behind his back or playing two or three harps simultaneously. Sincere convictions or venomous defamations, in any case, Nziengui never gave in to such attacks, imposing himself on the contrary to pay homage to the elders (Yves Mouenga, Jean Honoré Miabé, Vickoss Ekondo) while instructing the maximum of young people. He is thus the promoter of many young talents, the most prominent of which is certainly his nephew Jean Pierre Mingongué.

On the other hand, in modern music, dominated by the logic of profit or even commercialism, artistic creation must often be adjusted for a specific audience based on reason rather than heart. But instead of allowing himself to be distorted, Papé Nziengui has always tried to produce music that is not a caricature, worthy in its expression as in its content, of the sacredness and transcendence of the music of the Origins. This is what makes Nziengui—not only the musician, but the man—someone whose age hasn’t altered any of his freshness or authenticity. Carrying on his chest the harp, the handle raised to point the way, this way of civilization which slumbers in all fact of culture, Nziengui advances with the certainty of a pioneering spirit that many other harpists—emulators or epigones, competitors or rivals—will follow. Then is accomplished before our eyes the miracle of this forest, which grew in silence [an allusion to the proverb that says, “you can hear the crash of a falling tree but you cannot hear the forest growing”]. Papé is ultimately not the tree that veils the forest but the one whose music secreted the roots of the trees to come.

1 KADI YOMBO : « La meilleure danseuse est élue à la fin de la cérémonie » / « The best dancer selected at the end of the ceremony” /
C’est la “star”, celle qui surpasse les autres danseuses par ses pas de danse, sa puissance spirituelle, et dont on se souvient après la cérémonie.
She is the “star”, the one who surpasses the other dancers by her dance steps, her spiritual power, and who is remembered after the ceremony.

8 NIAGHALIANU GHURI : «  Répondez-moi ! » / "Answer me !” /
Une femme interroge ses proches qui ne l’écoutent pas. N’obtenant pas de réponse elle leur répète incessamment « répondez-moi » !
A woman questions her relatives who do not listen to her. Not getting an answer, she keeps repeating to them “answer me”!

Bandcamp Daily  your guide to the world of Bandcamp

sndtrak stops by with an Album of the Day Feature of his most recent release, FLIPS V1: Triple Lindy